A blessed unrest that keeps us slowly marching...

I can't believe it has been 6 months since I've posted anything. Terrible! I used to be so good about updating frequently...but it's been slipping slowly for a while. First it was lengthy and opinionated posts, then it became just quotes from others, and then just cool pictures I'd find on the internet (isn't that what Tumblr is for! So lazy). Anyway, here's another image stolen from elsewhere (http://fuckiminmy20s.tumblr.com/) that speaks to me these days. Yes, I work all the time, but my to-do list barely gets chipped away at. More important to let yourself be happy each day though. 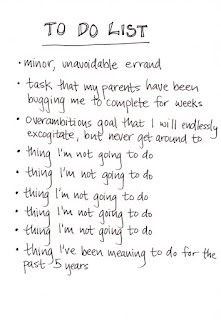