Bistro 7, a farm to table restaurant in Wilton, was kind enough to invite me for a tasting last week. I brought a fellow foodie with a long history of restaurant employment, Andrea. I am pleased to report that it we both found the evening to be a pleasurable and delicious experience, and I now have a new favorite place near home. It's all too easy to hit the same spots over and over, and Bistro 7 has given me a reason to branch out.

Upon entering, we were greeted by a friendly hostess and seated at a comfortable deep booth. The owner, Breno Donatti, arrived with a bottle of La Jara prosecco, two glasses, and a warm welcome. 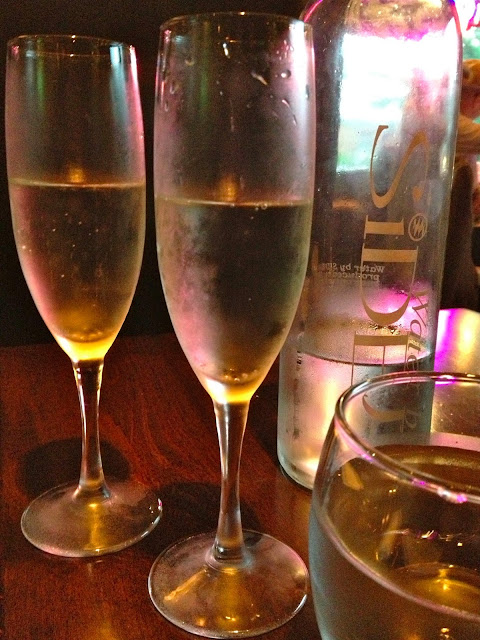 The interior is cozy, but retains an upscale feel with exposed brick walls and old fashioned fillament lightbulbs. It's clear that a lot of thought went into the design of the space, and upon speaking to Breno about how much we admired the attention to details, he explained how his wife had been an integral part of the design process. While comfortable enough to become a go-to favorite spot, Bistro 7 seems like a great "first date" kind of place. The glass divider between the bar and dining area is nicely frosted so the space feels open without being exposed if you're in the deep booths next to it, and the tables across the way are far apart enough for privacy. There's nothing more awkward than feeling like you're nearly sitting with the party next to you. Andrea and I were impressed by how "at ease" we felt in the space - even with a big open kitchen, there was no sense of frenzy or the sounds of slamming pots. An open kitchen is a great touch, but only if the action inside runs smoothly (Andrea and I both worked in a restaurant with an open kitchen, and it was more a source of embarrassment than anything else); clearly Breno and his chefs have everything under control. 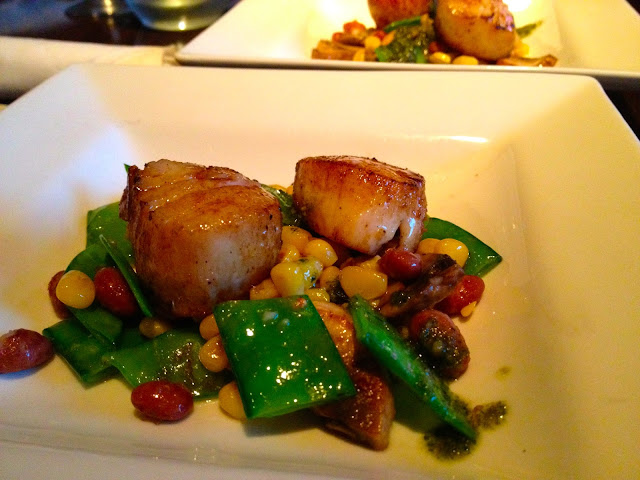 The first course arrived, and we dug in. A succotash of kidney beans, corn,  and sugar snap peas provided a tasty bed for pan seared scallops and a drizzle of tarragon pesto. Andrea and I were impressed by the perfectly al dente snap peas, scallops that were still tender (I've had overcooked scallops so many times; what a shame), and the surprising brightness of the pesto. 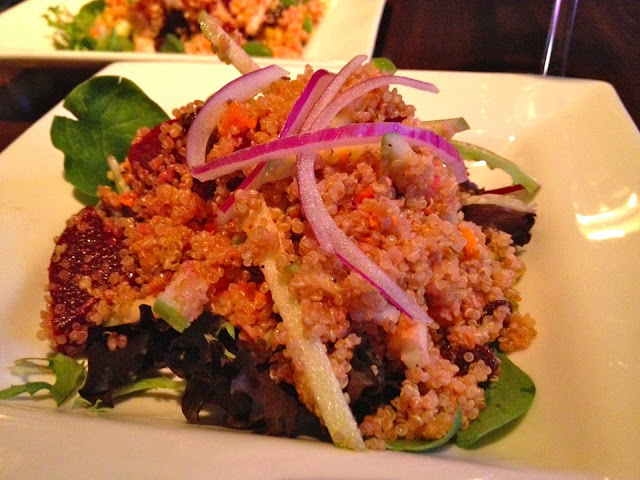 Next, a glass of Catarrato; a crisp sicilian white with a mineral undertone that paired nicely with a cold salad of white quinoa, marinated red beets, crunchy green apple, sweet potato, roasted corn, red onion,  and raisins with a spritz of lemon juice. I don't know how they make it, but I want to learn the recipe because it was delicious. I've never gotten quinoa to taste that good, or retain any texture beyond "mushy." Kudos to the chef! 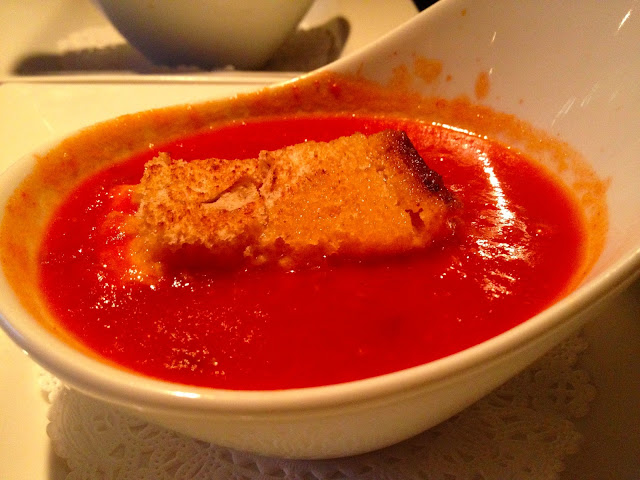 Our next wine arrived, Langhe Arneis Meriggiare from Lorenzo Allutto, as well as an explanation of how unique it is. Produced in very small batches by just 10-20 people, it's an organic white yet has a light orange hue. The color is a result of the hand processing; some of the skins remain on the grapes and impart a tint. The Meriggiare was paired with a hearty tomato soup topped with grilled cheese croutons - actual miniature grilled cheese sandwiches floating on the surface. It was tasty, but not the star of the show. 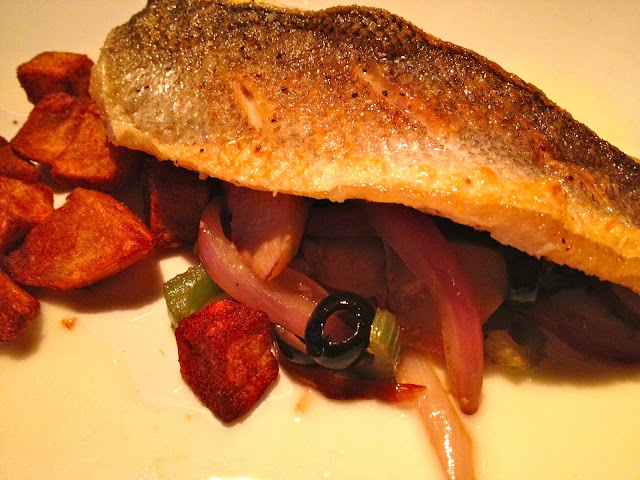 A crispy skinned branzino was next, and proved to be the favorite dish of the night; Andrea and I both finished every bit despite the knowledge that we needed to save room for more. The fish was flaky and moist, and the skin was extremely flavorful. The filet was resting on top of a "farmer's hash" of potato, artichoke hearts, olives, celery, and red onion, which was good but not even necessary - the fish was delicious enough to stand alone. It was paired with a crisp South African Beau Joubert Sauvignon Blanc, which was also excellent and very well matched with the flavors of the dish.

All the while, we were listening to live music that was so unobtrusive I had to ask Andrea, "Is this live, or just a really good sound system?" My ears perked up midway through the meal because "Take 5" by Dave Brubeck caught my attention. I often dislike live music at restaurants because it is too loud, but that clearly isn't a problem at Bistro 7. 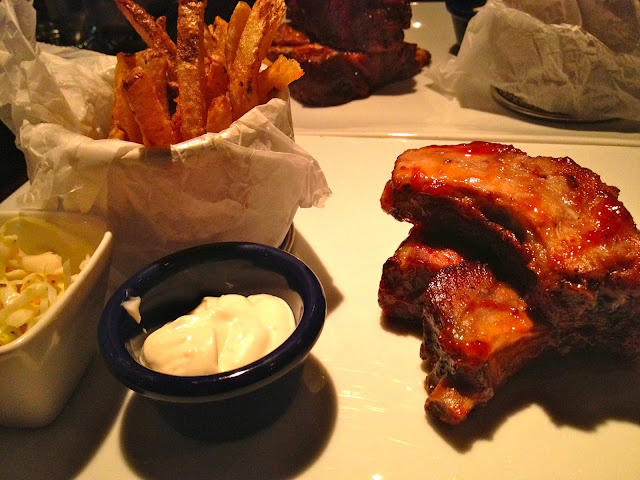 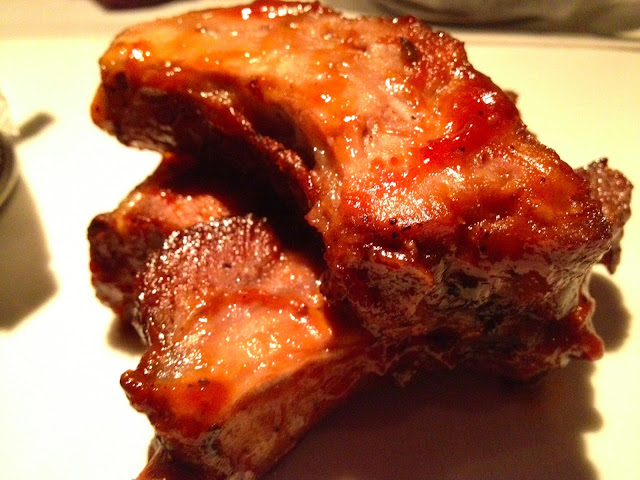 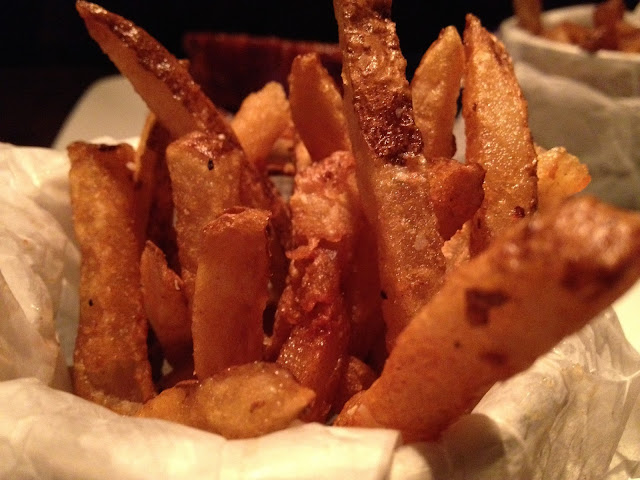 Stuffed to the brim, our eyes widened at the site of our next dish: meaty country ribs and truffle fries. Before having Bistro 7's truffle fries, the best I had ever experienced were at Wurstkuche in L.A. It's a close race, but I think Bistro 7's are better. I'm almost upset, because now I have yet another food I must try to resist! They were crispy, really "truffle-y" without being greasy or too heavy; I finished all of mine and then started stealing Andrea's as I whined about being too full. Neither Andrea or I had enough room to eat very much of the ribs, but we both enjoyed them. Lots of tender meat and a house made tangy barbecue sauce. The Honoro Vero organic Monastrell pairing was not like any wine I'd experienced before, likely because I'd never even heard of the grape variety, but I thought the flavor went well with the heartiness of the ribs. 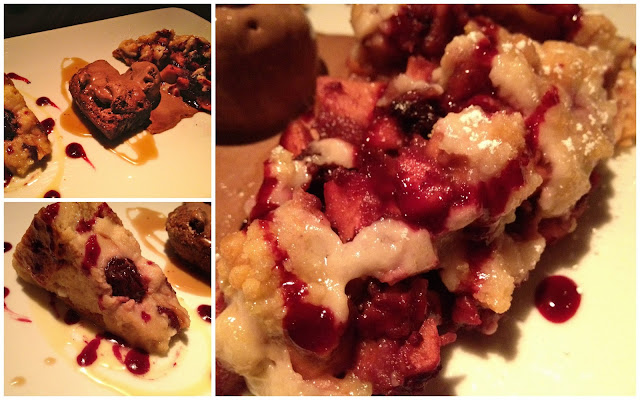 Lastly, we enjoyed a Sandeman 10 year tawny port with a trio of desserts: apple blackberry pie, chocolate brownie with a cream cheese swirl, and raspberry bread pudding. The pastry chef, we were told, is very passionate and inventive. Our waitress excitedly told us about how he just keeps producing better and better desserts. We enjoyed all three, and the fudge-y warm brownie was our favorite.

After the meal, Breno visited our table and we had a great conversation about food, and the importance of eating local. He sources as much as possible from local farms, which I think is fantastic - at the time of our meal, 100% of their produce was from local farms. As commercial agriculture becomes more and more damaging to the environment and our health, I will always support a business that appreciates local products. The one downside, he explained, is that when something runs out, there's nothing to do about it. Most customers, he told us, understood that buying local means there isn't an endless supply, so the occasional shortage has not been much of a cause for complaint. I'm glad to hear it! 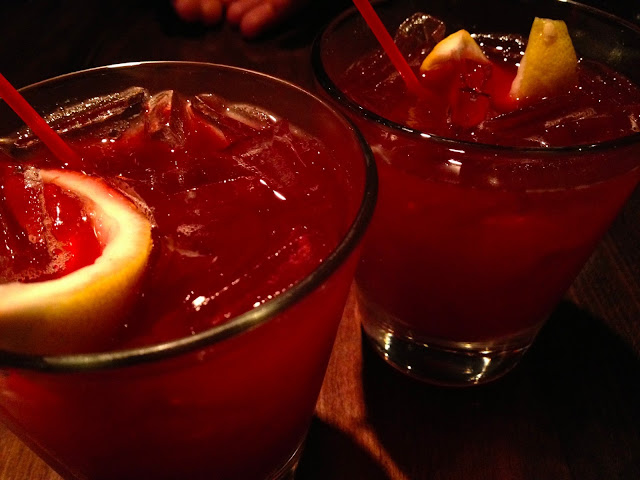 Andrea and I are big fans of cocktails, and Andrea does a lot of experimentation with homemade simple syrups, infusions, and new ideas for drinks. We always like to check out a restaurant's cocktail menu, and we told Breno how impressed we were by Bistro 7's. He kindly brought us two of the "sage advice" - organic vodka, sage infused simple syrup, blackberry Chambord glaze, and a squeeze of lemon. We were also impressed by the wide selection of organic biodynamic wines. Bistro 7 is doing an excellent job of supporting sustainable practices.

We departed the restaurant full, happy, and impressed. We will both certainly be returning for more. We have a new happy hour to try! The bar area, a bit more brightly lit than the dining room, features two large screen TVs, but they don't overwhelm the space or give any "sports bar sense." With such a great happy hour menu, I'll certainly be heading to the bar in the near future.

I was very pleased to find this site. I wanted to thank you for this great read!! I definitely enjoyed every little bit of it and I have you bookmarked to check out the new stuff you post.

Thank you so much! I am posting another restaurant review today, as it happens!

Their party planner treated my husband and I like his children, and my family like his family, and he put forth his best for us. A bit dramatic, but TRUE!