Update April 2015: Head Chef Jared Falco has left Washington Prime, and is now in the kitchen at Amore Cucina in Stamford, CT.

The newest hotspot in South Norwalk's rapidly growing dining and nightlife scene, Washington Prime, has been attracting crowds since it opened in late July. It's not hard to see why, as it dominates the end of Washington Street with a trendy exterior and couch-clad patio, and serves up expertly prepared and presented dishes from Executive Chef Jared George Falco. From a large horseshoe bar to high ceilinged dining room and ample outdoor seating, Washington Prime's customers range from suited corporate types at the bar to groups of 30-somethings and happy couples out for date night. The ambiance suits them all, as the space features both cozy booths, long tables, and a patio that's great for happy hour mingling. 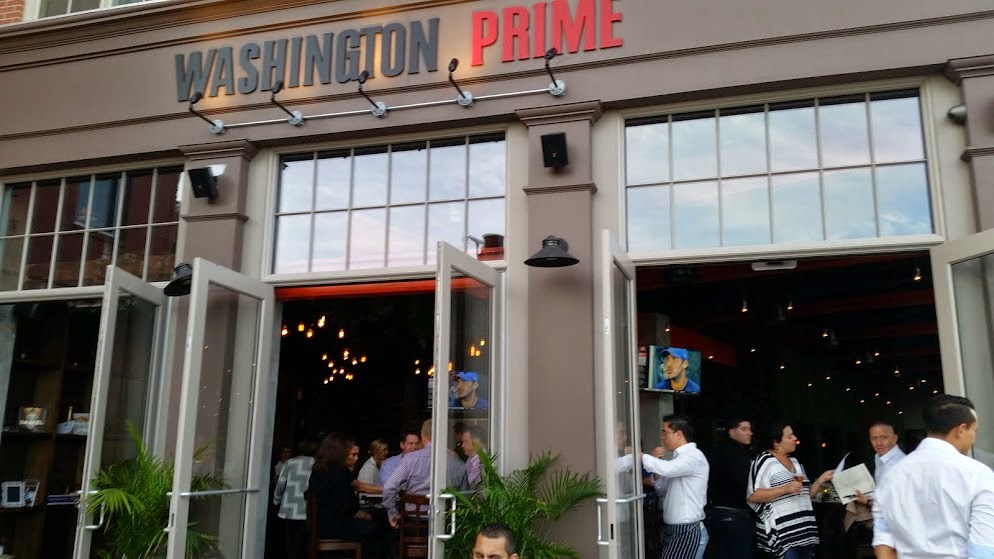 Of course, a pretty face isn't enough without a great meal to back it up. Luckily, Executive Chef Falco has the culinary chops to back up a space that sets the expectations high.

We began our meal with a series of small plates. First, Lobster Bisque with Parsley Creme Fraiche, which was richly flavored without, surprisingly, the use of any cream (besides the crowning dollop). Falco explained how he achieves this; by boiling all the lobster shells to create an intense stock.

Next, Burrata topped with creamy slaw, sambal aioli, and sesame atop pretzel bread, which is baked locally at Wave Hill Breads from Falco's own recipe. The combination of cool creamy burrata and crunchy slaw was nicely accented with the slight spice of sambal. 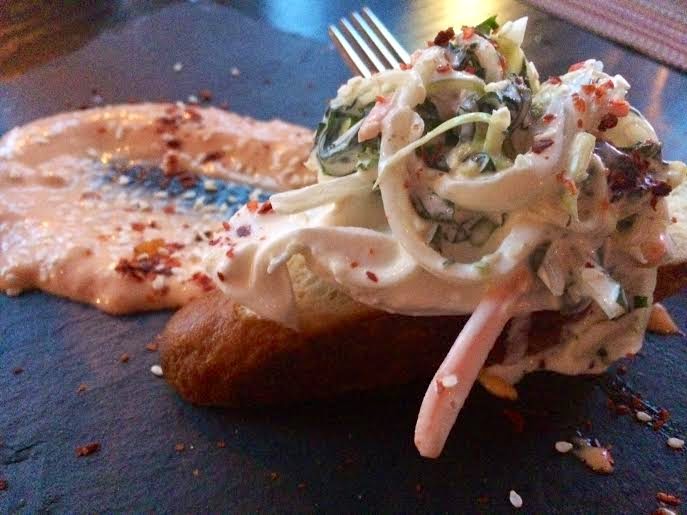 It speaks well for a restaurant when it's difficult to capture images of the food before the dish is attacked by an excited table of foodies. Deviled eggs with creamy yolk, prime meatball, pickled onions, and foie gras powder were snatched up immediately and enjoyed by all. The yolk was nicely seasoned, and the use of a slate slab instead of a plate was a nice, attractive touch.

A heaping serving of poutine was similarly well received, the thick cut house fries topped with cheese curds and oxtail ragu were hearty and filling; don't order this dish and then expect to put away an entire steak!

Standouts of the night were the three seafood dishes: octopus with spicy pickled peppers, duck fat potatoes, and pepper emulsion, scallops with middlins, corn relish, nicoise olives, and hunters sauce, and grouper with Carolina gold rice, tomato, asparagus, and carrot butter sauce. When I go to a restaurant and they have either scallops or octopus on the menu, I always order one (or both), because I think they are both difficult to prepare well, and are a great gauge of the chef's talent. In the case of Washington Prime, I was absolutely impressed by both dishes. 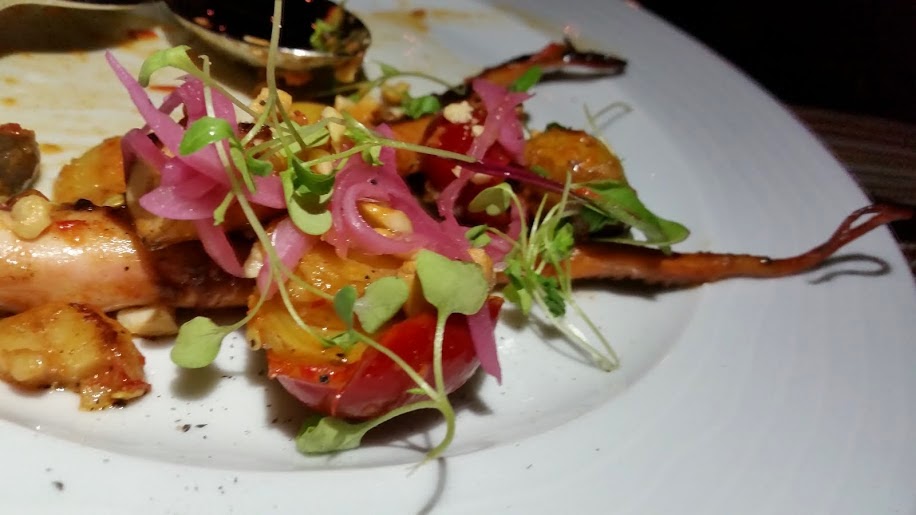 The scallops were tender and flavorful, but not so much that their delicate sweetness was compromised. The rice, I thought, was an unnecessary addition that distracted from the star of the dish. 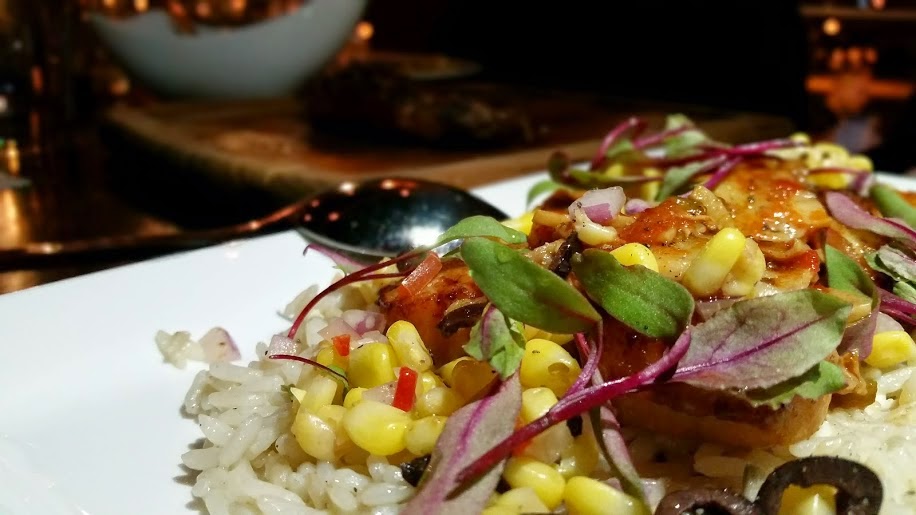 The grouper, too, was flaky and moist, with a buttery carrot sauce and still crisp asparagus that made for a winning combination. 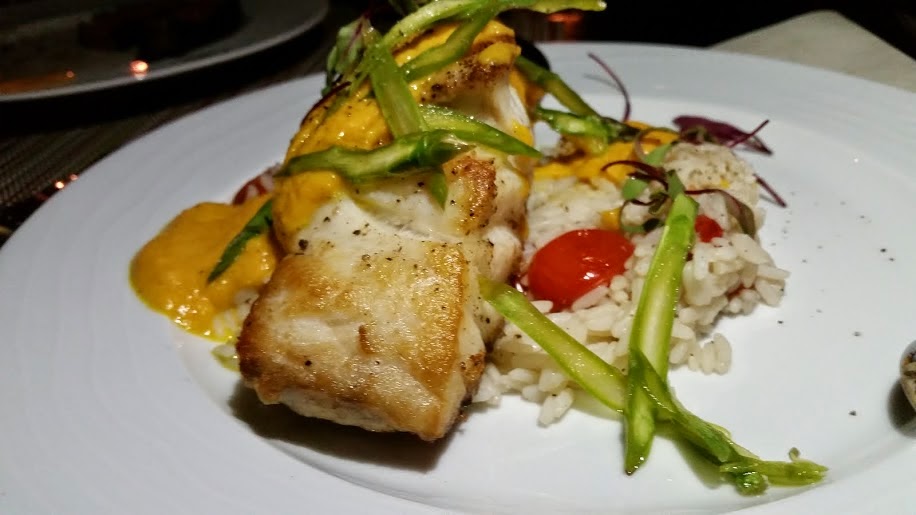 Our final treat from the sea, lobster knuckle and claw with blue corn grits and tobiko, was quickly devoured; the tender meat and salty bursts of tobiko were addictive. 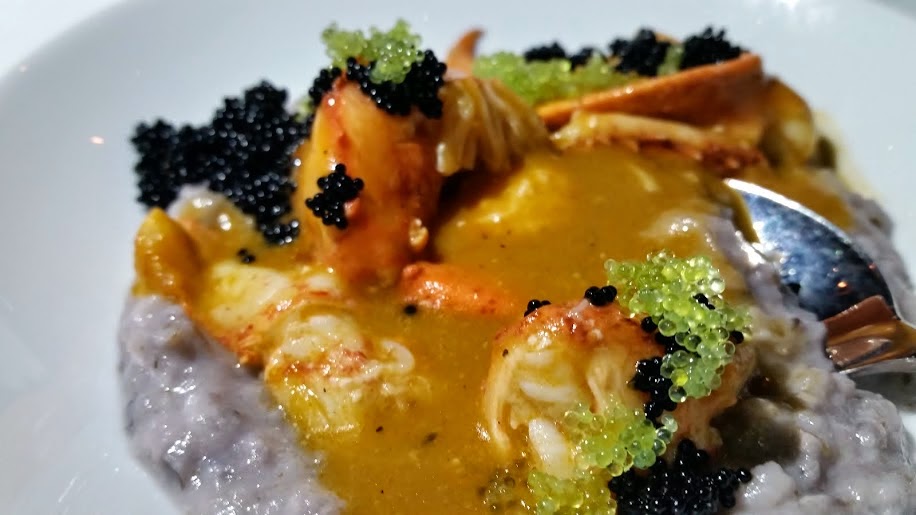 Two salads, the prime wedge and the chop chop, were good but not remarkable, though the pickled heirloom tomatoes that came with the wedge were delicious. The chop chop was described as being dressed in red wine vinaigrette but had a somewhat creamy and cheesy tasting dressing that was not to my liking. 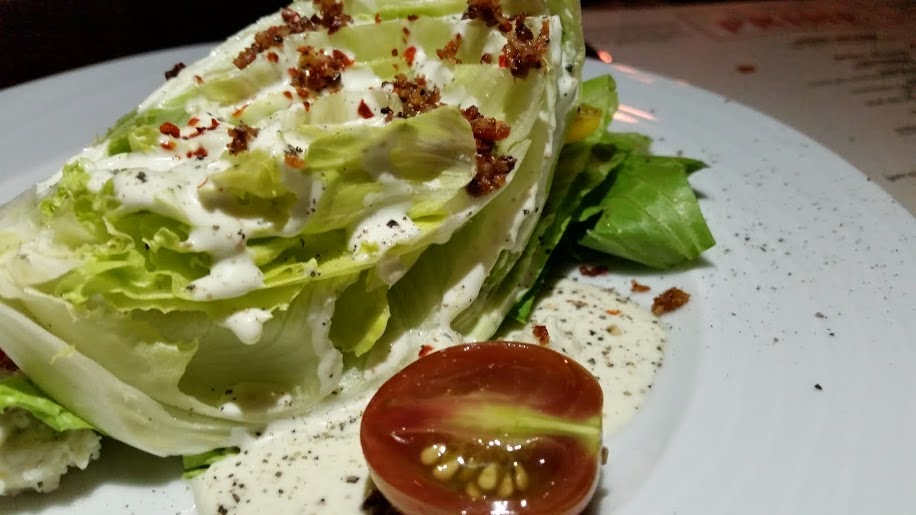 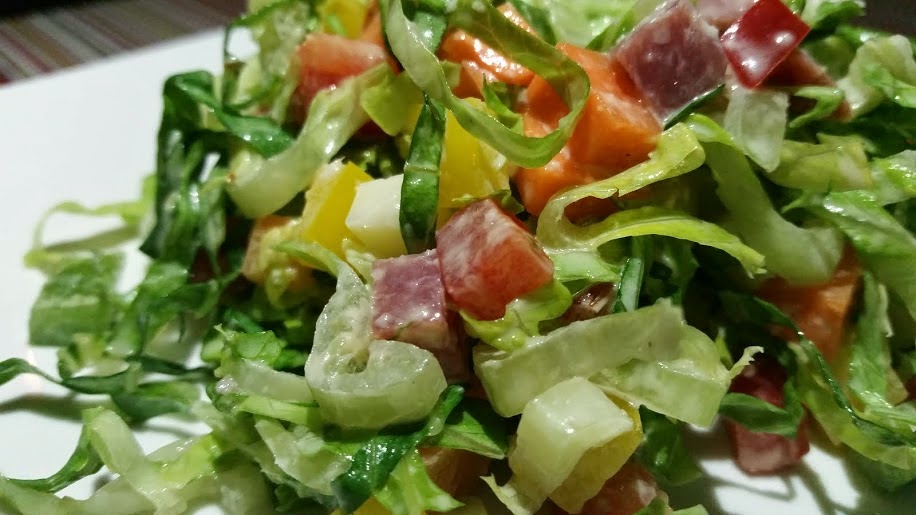 Of course, a visit to a steakhouse would not be complete without a solid dose of red meat, and we tried both the filet mignon and the ribeye, both of which were deliciously pink and juicy in the center. The filet mignon was tender, and the ribeye has just the right combination of fattiness and meatiness - definitely my favorite cut, both at home and in the case of this dinner. Steaks at Washinton Prime are served with a choice of one of their sauces: prime steak sauce, horseradish cream, bernaise sauce, maple truffle chili sauce, chimiccuri sauce, or umami bomb sauce. We had the pleasure of trying them all, and I honestly cannot choose a favorite, as they were all delicious (and made for a pretty plate).  I would happily dip french fries into any of them. 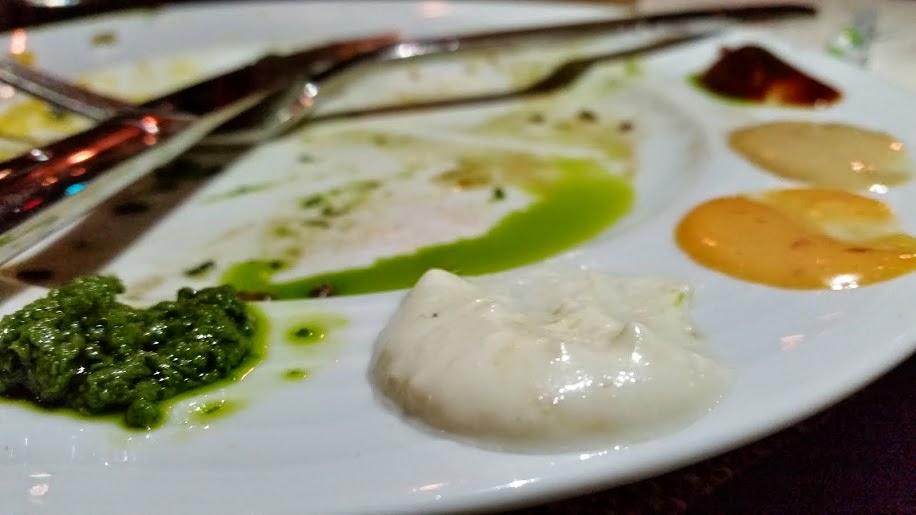 Despite being full to bursting, we couldn't resist dessert. A caramel crowned, chocolate covered cake and ice cream combo, chocolate chip cookie ice cream sandwich served with cereal milk, and a slice of one of the best cheesecakes I have ever had. It was difficult to resist gobbling it all up, sharing be damned! I highly recommend saving room for dessert. 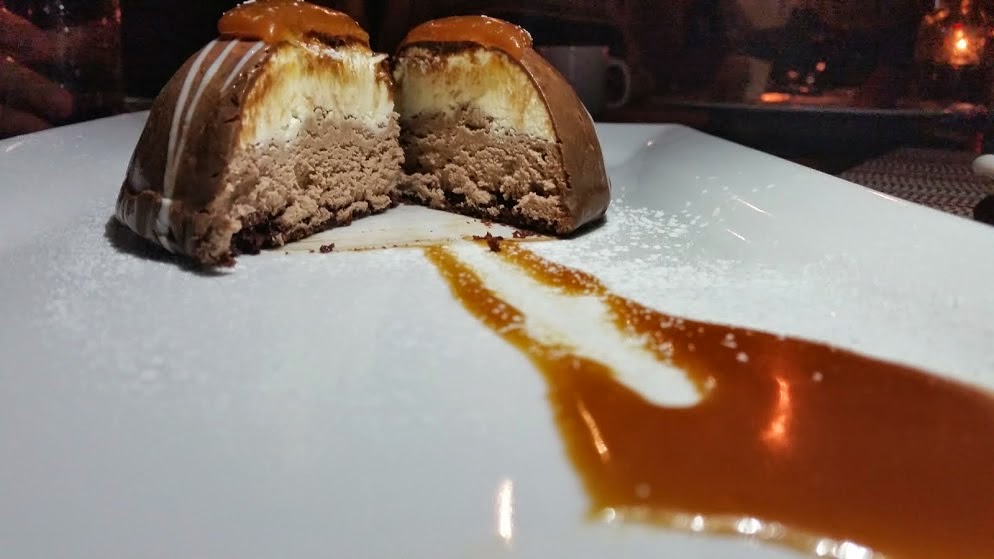 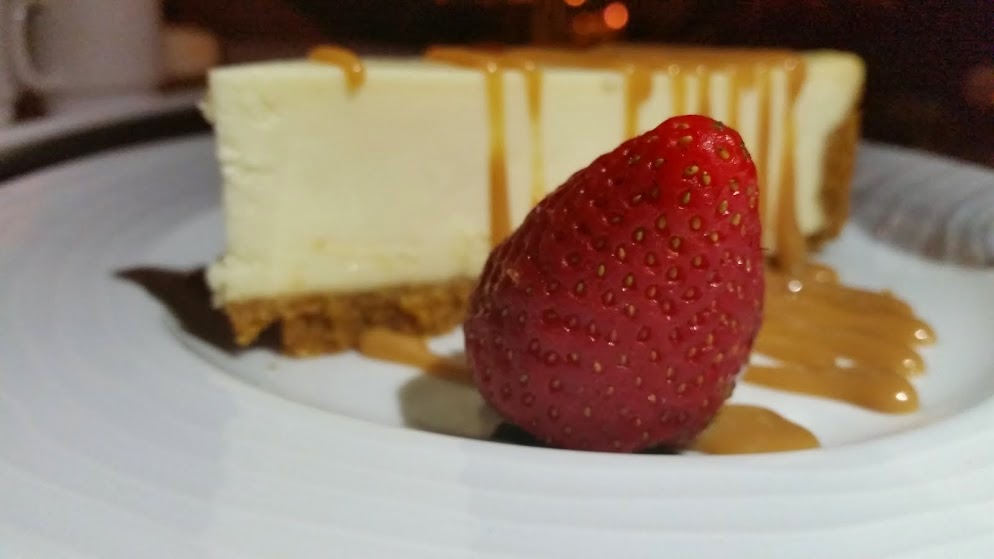 Washington Prime is definitely worth a visit, whether you favor steaks, seafood, or a sampling of small plates. Attentive servers and delicious cocktails rounded out our experience and made for a truly enjoyable evening.