Paloma: Highs and Lows at a Waterfront Hotspot

When I saw Aarón Sánchez at last year's Greenwich Wine + Food Festival, someone said, "Oh look! It's Aarón Sánchez," and I said, "Who?"
I've never really followed the Food Network; the chefs I follow and admire are ones whose restaurants I've dined in and loved (Nick Martschenko of South End in New Canaan, for example), or whose food I dream of trying (Dan Barber of Blue Hill at Stone Barns comes to mind.) I try to be a little more aware of pop-culture's revered chefs these days, but I greatly prefer to eat food than watch its preparation on a screen. 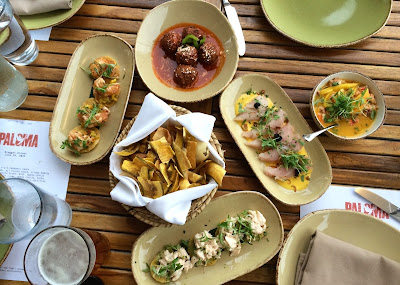 Now I can say that I have both seen a TV personality in the flesh and eaten "his" food (of course, Aaron did not personally cook the dishes I tried, but they are his creations nonetheless). It was a mixed experience, but there were some definite standouts despite a couple serious misses. First of all, Paloma in Stamford, CT gets major points for ambiance. The large glass building sits directly above the water, and unlike its predecessor the Beer Garden at Harbor Point, it's in a neighborhood that feels trendy and buzzing with activity. Just a couple years ago, Harbor Point felt deserted and industrial; now it boasts, in addition to Paloma, The Sign of The Whale with its packed rooftop, World Of Beer with its impressive lineup of suds, and soon, Fortina (which I've been dying to try) and Bareburger will join the list. At a recent dinner, I had the pleasure of dining waterside and sampling a parade of beautifully plated dishes. 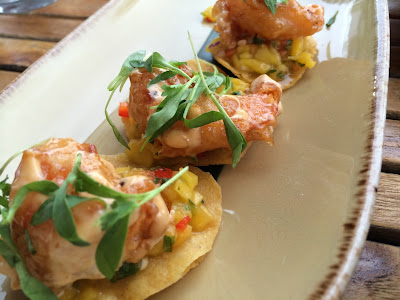 For appetizers, two seafood tostadas: crab salad and fried glazed shrimp. The crab was sweet, tender, and the delicate dressing did not interfere. I didn't even eat the chip, it wasn't necessary. The shrimp was tangy and offset nicely by mango salsa. It reminded me of the Bahm Bahm shrimp appetizer at B.J. Ryan's in Norwalk. Sometimes I go to B.J. Ryan's just to have a beer and that appetizer (I can't recommend a visit for any other reason.) 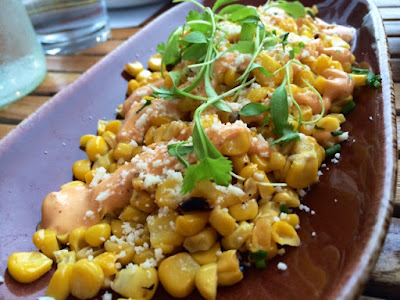 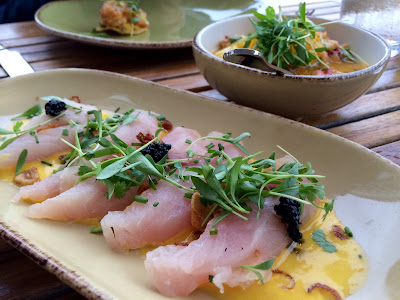 Next, another round of seafood: snapper crudo and lobster ceviche. The crudo was on top of a delicious sauce that I couldn't identify, but it was excellent. I have to say though, this dish was reminiscent of a hamachi crudo I had last year at The Spread in South Norwalk, and it made this one pale in comparison.

The lobster ceviche was the only dish of the night that I would call terrible. It was tough, half shredded chunks of lobster drowning in what tasted like mango orange juice. However, another blogger commented that he'd had it on a previous visit and it had been totally different and totally delicious. 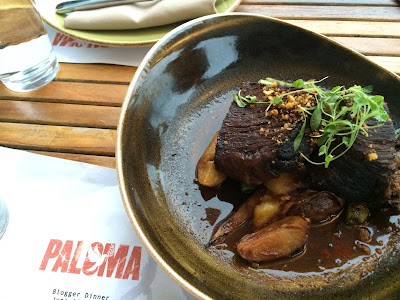 The standout entree of the night was short rib with ancho-cacoa rub and seasonal vegetables. It was fall apart tender, and richly meaty. The general consensus was that it was slightly dry, but would have been just perfect with a little more gravy. I was a fan, despite the sauce issue. 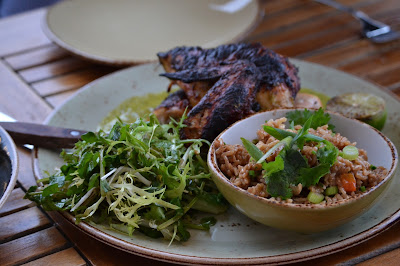 I liked the garganelli pasta with ground chorizo, but it was odd. Very strongly flavored and oily. Like late night drunk food, which isn't to say it wasn't tasty!

I also tried the Cuban style roasted chicken, and enjoyed the unique tamarind fried rice that came with it; I'd order it as an appetizer all by itself.


The failure of the entrees was the Camarones Mojo de Ajo. Like the lobster, they were tough and the sauce was strange. Oh well, not everything can be a hit, and anyone who thinks everything is wonderful is usually either lying or just convinced that a pretty plate means something must be good. 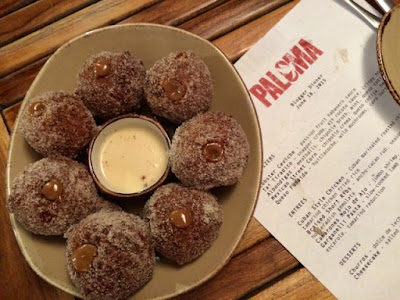 The evening certainly ended on a high note with dulce de leche topped churros worth killing for. I would make a deal with the devil if it meant I could consume these endlessly and never gain weight. Andrew Dominick of Food Dudes managed to eat an entire fried, cinnamon sugary ball in one heroic bite. These churros make you lose all sense of reason, what can I say?

Conclusion, go to Paloma, sit at the bar, soak up the waterside ambiance, order the crab tostadas, short rib, and churros. You'll have a great time, I promise. Just pass on the lobster ceviche. ;-) 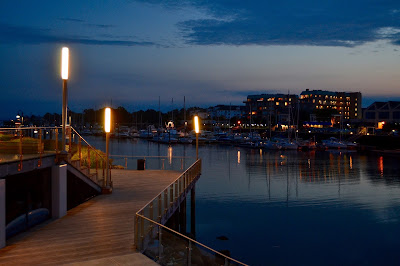 Good blog thanks restaurant and bars are doing best service ever